Unknown said:
Is it just me, or does the bug-eyed version not have his upper lip oking out from behind the jawpiece?
Click to expand...

You are correct his lip isn't visible like the corrected one but like said above it might just be the way the jawpiece is fixed in the package.

Actually there's one left. I just got mine for $9.50 from Amazon. Someone better pick it up fast!

Got him in the mail today from amazon.com!

I reviewed him in the reviw section!

For all the flack I've seen about Revan's mask, I'm surprised we haven't heard as many criticisms of Malak's sculpt.

Granted, we've all complained about the large jawpiece.

But what about the inaccurate cape (it should be more of a half-cape, almost like Boba Fett's but longer) and the two missing lengths of cloth hanging from the back of his waist?

I'll give you that Malak wouldn't be able to sit down with those two things on his backside. But when do we ever see him sitting down in the game?

Of course, I'm still gonna get him!

Now if Hasbro could just design and release a Bastila and HK-47 (meatbags!) 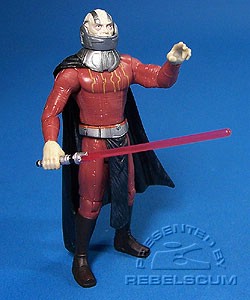 Fans of KOTOR should be finally happy...2 figures from the game!
N

Mr Curto said:
Fans of KOTOR should be finally happy...2 figures from the game!
Click to expand...

Im looking forward to this one,

Got mine today...totally awesome...
S

This figure looks great! Could've been a little better but I'll still buy it.

Got mine today as well...

Not great, but not bad either.

Got mine on Sunday at Kohl's. I passed Revan on to my oldest boy Rytel.

Here is a pic I made of him.

I'm still dissapointed in the Malak figure. His metal jaw looks too big imho and also he's too short from the pics I've seen. In the game he's about a head taller than Revan but on all the pics I've seen with the two standing side x side they look to be the same height. Still if I can ever find him I'm gonna pick him up.
T

Aside from the flaws with his head area, I think this figure is better than Revan. Funny, and disappointing at the same time.
D

Like Revan, I was able to get three of these, one to keep on the card, one to play with and one to customize.

I have seen art of this figure and the pictures of the figure before I got him. I expected to be disappointed. But I was not. He's not such a bad figure.

I cant wait to make a custom of him!
R

I ordered this guy online yesterday from a store that had him in stock! Really hope he arrives soon.

I loved the KOTOR games, so it is really amazing that we're getting such a cool character. Shame he is not really very sinister looking, but I guess I'll cope!

This EU wave has me the most excited about new figures since the first wave of ROTS figures.

This is not a bad fig, just not too keen about his legs. Might try to do a custom boil and pop or something. Then again I may just leave it be, I'm not too picky when it comes to flaws in figs....

anyone has had this problem?
L

great, another set of figures i will have to buy. i love the kotor series, so i have to have them
T

I finally found Malak at Collectormain today. As I've done with Revan, I'm gonna comment on my new views concerning some of the complaints I made regarding this figure.

Prosthetic jaw-While it still lokks a tiny bit oversized, it's not as huge as I thought it would be.

Metallic collar-A minor nitpick, which doesn't really other me now. Like the jaw, a tiny bit on the large side, but not by much.

Beneath the jaw-While it doesn't bother me since I've got him wearing the prosthetic jaw, it still bugs me a little bit, especially since his upper lip seems to poke out over the jaw.

So really, my previous complaints are pretty much gone now. I think I like this guy over Revan. Took me a while to put him into a pose I liked, but he's easier to display that his master.

A good, but not a great figure. The design is somewhat lackluster - but that ain't Hasbro's fault.

His outfit is just a bit boring. Glad to have another Sith, even though this guy seems to have the dullest fashion sense of any Sith save for Sidious (and just TRY telling that to his face!)

I also am not crazy about the perpetually "looking up" gaze he has. Makes it hard for him to realistically duel anyone shorter than he is.
I

Picked up this guy today. I thought about grabbing a Revan but passed. This guy looks better than I thought

I am very very happy with it

I was looking at Malak today, and I thought to myself, "That arrow on the back of his head makes like look like Avatar's Aang!".

Picked up Lord Malak Today And as soon as Nihilus And Bane arrive next year I am Going to Start A Sith Lords Shelf to display them All.
M

Is this figure going to be packed in any other waves? I haven't seen him anywhere, in the wild or on the internet. And I really really want him (not enough to pay scalpers of course).

So I guess I'm asking am I doomed, or is there some slight hope for me?

Darth_Rend said:
I'm still dissapointed in the Malak figure. His metal jaw looks too big imho and also he's too short from the pics I've seen. In the game he's about a head taller than Revan but on all the pics I've seen with the two standing side x side they look to be the same height. Still if I can ever find him I'm gonna pick him up.
Click to expand...

Yup, Malak's supposed to be a brute, standing 2 meters tall. Yet, he's actually smaller than the Darth Revan action figure. Very disappointed at that aspect of Darth <s>Mini-Me</s> Malak.

Finally got him! I am very pleased with this figure. I do wish he was taller and his lower legs are at an odd angle, but otherwise I'm very happy. The removable jaw piece is so much better in person than in the photos online. Now all I need is Revan to go with him...
S

I just found this figure today at Target unexpectedly!

Shevu said:
despite the fact that I never played KOTOR
Click to expand...

Play it! You'll be glad you did. Malak was wicked bada$$ and a very good villain in the EU. Seeing him for the first time with his mask off was just as good as seeing Vader semi-un-helmeted in ESB.
Y

Finally picked him up to join Revan.

He's not bad..my only gripes is that he's too short and his face could have looked more seriouse.
T

I think the reason he's a bit short is because his ankles are bent, and you have to bend his knees to get him to stand up right. Hasbro was probably trying to find a way to sculpt his legs to allow action poses. If his ankles weren't bent, and his knees didn't have to be bent, he'd be a bit taller, I think.

Definetly not a fan of Revan's and Malak's leg issues, but still like them alot. Still trying to figure out an easy way to customize their legs. Then again I may just leave them alone, not a very big deal to me.
N

Ordered one from TRU!
U

Found him today at Frank & Sons for $9, so got him. I like everything about the fig except (1 the legs... too short, awkward hip articulation (this is one area I don't think needs a ball joint but his legs are too close together) and the lack of ball joint for the ankles. I'm thinking about swapping some Evo Vader Legs onto him for a boost in height and the necessary articulation.

I would also like somewhere to put that lightsaber hilt on the belt (either a peg on the hilt or a hook/peg on the belt with a matching slot for the hilt itself.
L

Just a quick one...has anyone found that the jaw piece is a bit weak?

Has this caused anyone any problems in the past?
C

Just a quick one...has anyone found that the jaw piece is a bit weak? Has this caused anyone any problems in the past?
Click to expand...

I wouldn't say that my Malak jaw piece is weak so much as it's too soft, and it tends to always be slightly askew from where I want it to be.
You must log in or register to reply here.
Share:
Facebook Twitter Pinterest Email Link
Top