There seems to be a lot of clamoring for some new Dagobah figures...namely

All would be resculpts but would you buy them? Do you want them???
D

All except R2. I have the one from the X-Wing which is good enough.

Those would be cool, although the Dragon snake would be totally EU since all we saw was its back
B

An OT Yoda that could hold his gimer stick like the newest Saga version would be great.
D

I would primarily be interested in a Luke with articlution making it possible to perform a handstand. R2 would be great for me since I am not going to shell out the money for him in the X-Wing. Of course you have to have Yoda in the mix. It would be nice if they all came with different accesories like the snake, Luke's survival kit, rocks, etc.

I don't think we necessarily need a whole wave, but a new Yoda and Luke Dagobah would be most welcome. Perhaps as Ultra two-pack w/ a base so Luke can do a handstand...

Originally posted by Old Cocky:
Do you want them???
Click to expand...

<font size="2" face="arial">For the exception of R2, HELL YEAH. We are in dire need of an updated, non-buff Dagobah Luke figure. Also, we're long overdue on having a good OT Yoda figure made (with TWO functional legs).
D

I could go for a Screen Scene of these. With nice accessories and maybe even one of those flying Dagobah creatures with articulated wings.

<font size="2" face="arial">A bog-wing, yeah I'd be down for that, a sleen, nudge(these are all likes lizards and snakes, etc).

I believe Hasbro may get us with this wave for the suberb sculpts, articulation, and swag interlocking environment bases.

I welcome all of them with open arms. There are enough half-size figs to pack in some potentially cool accesories. With R2-D2 it would be pretty cool if we got that flying whatchamacallit, Yoda could have the survival kit and flashlight so he could rummage around and Luke should come with a blaster to point at stuff, mix in some snakes everywhere and we're golden.
R

and what the heck, throw in a dirty R2-D2

Front page has a rumor a Dagobah wave is indeed in the works. Good news
S

I think these are among the most necessary resculpts needed. Luke and Yoda most of all. R2 I think can go either way; if he's a slimed up version of the drink tray sculpt, I'll buy one.
M

Originally posted by Old Cocky:
There seems to be a lot of clamoring for some new Dagobah figures...namely

<font size="2" face="arial">Not from me.
Seriously.
This whole wave would totally bore me.
Redundant and pointless.
No thanks.
O

Hmmm...I've seen Yoda and Luke on a ton of Resculpt want lists...they have never done Yoda justice IMO. I'd love a vintage style figure. Training style Luke witht ability to do a handstand and rocks, gear etc would be very welcome too 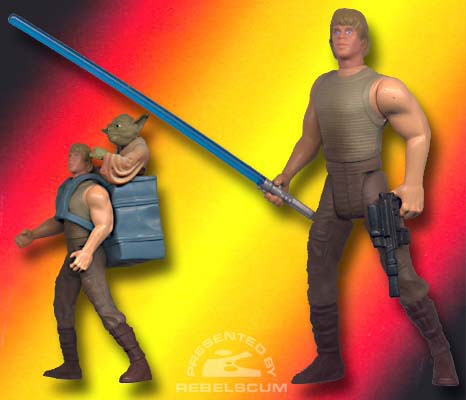 Originally posted by Old Cocky:
Hmmm...I've seen Yoda and Luke on a ton of Resculpt want lists...they have never done Yoda justice IMO. I'd love a vintage style figure. Training style Luke witht ability to do a handstand and rocks, gear etc would be very welcome too

It's interesting to see how Hasbro will pull this one off. They should put R2 with Yoda together as a two pack. And Dagobah Luke should come lots accessories.

Or maybe a screen scene?

Hmm, when together with an Obi-Wan gost fig.. I would get all for a dio.. but depends on accesoiries
N

Yeah that Dagobah Luke needs a new version. It begs for it!

I would like to see a new Obi-Wan spirit figure too.
P

the selling point would be the acccesories. Will this capture the mysterious and menacing spirit of Dagobah.

They could re-pack the POTJ Vader (Spirit) since mine can´t plug his head in place anymore.
I could buy the POTJ version again but wasn´t it a bit hard to get?

A Spirit of Ben Kenobi figure would be cool too.
Maybe make him able to sit down- with a transparent blue vinyl robes.

Luke : Would 100 % be a new updated sculpt with some swamp base to make him "handstand".

R2 : Give us a repack of the X-Wing figure including all the acccessoires ( I could stop looking for the fighter then !!)

Yoda : The only, IMO "interesting" way to give a new ESB style Yoda would be a ULTRA figure.
Placed the dwarf on a giant card, include his house and voila !!!!
If placed on a Basic card, YOda could come with an updated Ben Ghost.

Thats it. Maybe include some swampcreatures with each card.

I have been more or less disatisfied with every aotc Yoda we've gotten. Whether it's the horrid spinach-green color (all recent releases), snarling face (clone wars and dooku duel), youthful appearance(padawan 2-pack)or guerilla-length arms (deluxe), I'm DYING for a decent Yoda.
G

Here's the possible figures for this wave.
Luke-training(tank top) resculpt

Luke-Fatigues-Basically a clean version of the bespin outfit(this is when he first wore it and the only time it was clean.

Luke at the cave- this would be the bespin outfit with the jacket open.

Vader at the cave-A reissue of the POTJ one.

making all thes lukes in one asstment would be redundent, but this is just a list of poosbilities.

Originally posted by Old Cocky:
There seems to be a lot of clamoring for some new Dagobah figures...namely

All would be resculpts but would you buy them? Do you want them???
Click to expand...

Originally posted by The Real Scooby tm:
Luke : Would 100 % be a new updated sculpt with some swamp base to make him "handstand".

R2 : Give us a repack of the X-Wing figure including all the acccessoires ( I could stop looking for the fighter then !!)

Yoda : The only, IMO "interesting" way to give a new ESB style Yoda would be a ULTRA figure.
Placed the dwarf on a giant card, include his house and voila !!!!
If placed on a Basic card, YOda could come with an updated Ben Ghost.

Thats it. Maybe include some swampcreatures with each card.
Click to expand...

<font size="2" face="arial">Good ideas here. For the Luke, I agree that a base with peg-hole hand that can not only allow him to hand-stand, but to hold his saber, also pegged... NOT magnetic. And how about a removeable fatigue jacket? I know in this scale it's hard to do this convincingly, but look at the Princess Leia Collection two packs... they did the jackets for the Cermonial Luke and Bespin Han included with those pretty well...

Yoda does need an all new sculpt, and a house accessory would be cool, but it won't happen. Yoda needs to look old, feeble. This is the only way.

R2- the one from the Saga re-issue X-Wing was perfect, but many who passed on the fighter would love to see him carded, as would I...

A new spirit Ben, able to sit; that gets my vote.

The POTJ Dag Vader is perfect. No need for a re-do, though many would buy him again is re-issued as a "Hall Of Famer". I've heard talk of the face mask "breaking" on many of the first issue ones.... hmmmmm...

Monsters... eh?? Not so much. Reuse your Mynocks from the recent Chewie fig and Mynock Hunt cinema scene for swamp creatures, not to mention your "swamp creatures" Episode One packs.

A Saga scene pack with Luke, Yoda, & Ben, against a Photoshopped background that looks suspiciously like the PFX X-Wing would kick butt. And gimme that disappearing ladder for the X-Wing, seeing as how the second-wave Target exclusive Accessory pack Rebel Flight Technician set looks to never see the light of day...!!

Isn't that artoo from the x-wing the '95 potf2 artoo with a muddy paint app.

If so, no thanks. I wouldn't want such an inaccurate artoo.


This wave isn't something I'm at all excited about though. I'd still rather see characters get made that have never had a figure, rather than re-dos/re-sculpts of ones we've had a ton of already (like Luke).
O

From the front page...

Dagobah Wave
Stéphane: A well-connected, but anonymous source has confirmed that Hasbro plans to release a Dagobah wave, made up of at least R2-D2, Luke, Obi-wan Kenobi (spirit) and Yoda. As always nothing is official until Hasbro announces it so keep an eye on their website for upcoming revelations.
R

Sounds cool, but if they rehash that non-articulated Frito-Lay Spirit Obi Wan (which I know they will
) someone needs a slap.
G

Originally posted by roguestormtrooper:
I would like to see the following:

and what the heck, throw in a dirty R2-D2
Click to expand...

I dunno if it's just me, but I see NOTHING coming out of this wave... at least, nothing that I want to buy... argh...

For those of you that aren't excited about the upcoming Dagobah wave, let me ask you this: Are you happy with the POTF2 He-Man Dagobah Luke figure, so much so that you feel that there's no need for another? And what about OT Yoda?

I welcome them all! We have needed a new Dagobah Luke since...well since that first piece of steroid addicted crap came out. Th ability to stand on his hands is a must I think. A new Yoda is also a needed, the old ones just don't hold up anymore. R2, well...I could really take or leave another R2, will have to see how he turns out, but since I never got the one with the X-Wing I would be happy with a muddied up R2 I guess. Spirit Ben...I don't know, we already have two versions of him. Not the best I agree, it wll be interesting to see what they do with him. As long as it looks better than that AWFUL Hologram Luke that's on the way. Maybe they could do the Luke and Yoda (maybe even the R2) like they did the Hoth Luke and Wampa and make then where their bases can connect.

I want the luke, and if it's a resculpt, maybe the obiw-wan and yoda...but the Dagobah R2 that just came with the x-wing was perfectly fine IMO.
D

I am interested in this whole wave. I really want the artoo, cause I see him coming with some boxes and even the "charger" unit used for him. I also welcome the luke cause I want him to be able to stand upside down ( IN THE PACKGE!) and come with some rocks and removeable jacket and yoda carrier. Yoda I also look forward to cause well, he's yoda. Maybe he could come with a chunck of his house (yeah, right).
You must log in or register to reply here.
Share:
Facebook Twitter Pinterest Email Link
Top