anybody know what he looks like? does he have the same camo as ROTS?
J

I would love a figure of him in the same articulation as this years in animated format.
S

Im also amember of the SirStevesGuide forums and a member by the name of Tycho posted this figure along with a few other figures and he said that Commander Gree and the other figures had been confirmed.


Im hoping that this figure isnt a simple repaint, but I guess that depends on what he looks like in the Cartoon.
O

I wonder what Gree would look like for his Phase I job. Wouldn't mind seeing Bacara or Bly in Phase I either.

I found a pic of clone wars Commander Gree... 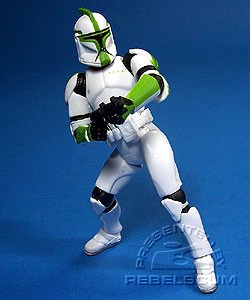 J/K But the way the color schemes are going...this might not be too far off.
K

^^^^ thats what i am afraid gree will look like
O

J/K But the way the color schemes are going...this might not be too far off.
Click to expand...

No no no, all wrong! There's no stripe connecting from fin to helmet on the CW Gree.

Then you must mean this one: 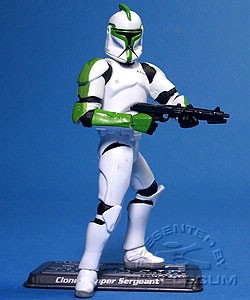 
Mr Curto said:
Then you must mean this one:

I was going to say the same thing. Once I read the post, I had to check out my Clone Trooper Sergeant.


Mr Curto said:
Then you must mean this one:

No, no, that's the 442nd Siege Battalion Trooper

He'll probably probably have grey colors since the camo was just for Kashyyyk.

Unless we see him fighting on another jungle planet in Clone Wars.
K

I hope they don't turn Gree into the "jungle warfare" clone. Let the guy fight in other terrains!

They could make a Phase 1 version of the gray Evo/SL commander and call him Gree.
K

could be in the show and not the movie.
C

i just said the databank confirmed him to be in the movie.
J

Opps my bad I must have over looked that part.

I think this is Gree.

He looks pretty cool, glad they didn't mail it in with just using the phase 1 sgt deco sans the dots.
J

Looks a little bit like gree dose with the chest and helmet decorations.

While I think I like his darker green and extra parts, I need a better image. I'm too distracted by the fact that the gun is not actually in his hand.
J

I want a realistic version of this guy too. C'mon Hasbro!


joleshsegnam said:
I want a realistic version of this guy too. C'mon Hasbro!
Click to expand...

Ya it would be nice if it were done.
R


Rune_Haako said:
I think this is Gree.

you gonna tear and share some of those pages with me, right?

No, cause I don't have the book.

This is from the Visual Guide ( I don't have it either.

too bad he dosen't have those suspenders like he did in rots.
S

I know you said it is from the Visual Guide and you said you dont own it yet, but which website did you get it from and were there any other pics from Visual Guide?

This off topic, but a fellow posted in the Clone Wars Visual thread in Comic and books section saying that there arent that many pages deticated to the clone troopers. Which kinda sucks in view.


sesdelta38 said:
I know you said it is from the Visual Guide and you said you dont own it yet, but which website did you get it from and were there any other pics from Visual Guide?
Click to expand...

Nice to see were getting more than a few stripes and dots on the clones.

GG had a maquette of ph. 1 Gree, but pics were prohibited. Looked really sweet too. So for swspiffy & I -that was our first time seeing the new 'Gree.'
D

This Gree looks great. I'm on the band wagon here. Hope he is weathered and not as clean as Cody.
J

He actually looks cool. I'm glad they went the same route they did with Cody and incorporated elements from his Phase 2 look into this design. Hope they do the same with any of the other commanders if they're brought in.
O

Doesn't look too bad to me, might warrant a purchase.
T

I'd buy them both.