HothHan said:
I have extras from Ren, Astly and Planko if anyone wants
Click to expand...

HothHan said:
I have extras from Ren, Astly and Planko if anyone wants
Click to expand...

What store in Jersey did you find Atsy and Planko at?

Captain_Piet said:
What store in Jersey did you find Atsy and Planko at?
Click to expand...

Supposedly they can be found at Kohl's department stores, albeit at a higher price than what is typical for a $6, 5POA figure...
O

It is so now Captain Planko.

Also anyone want the armor from chewie. I caved and bought him today.

Captain_Piet said:
What store in Jersey did you find Atsy and Planko at?
Click to expand...

Kohl's. I would not have gotten them without some Kohl's cash that my wife had and a coupon. Fn $11.99 each lol

How much do you think I could get if I whacked a lot of 15 on eBay?
I have no interest in build-a-turds but I would like to have some extra money for Rey's Speeder...

I have a feeling these are going to be a plague on the community until someone finds a way to turn them into something cool then we'll all be kicking ourselves for dumping them.

Maverick10126 said:
Also anyone want the armor from chewie. I caved and bought him today.
Click to expand...

Darn. Wish I had read this earlier. I bought it for just the armor (for a custom). lol. Oh well...

my_kind_of_scum said:
Darn. Wish I had read this earlier. I bought it for just the armor (for a custom). lol. Oh well...
Click to expand...

Dang! I thought I read someone wanting the figure for just the armor but couldn't remember who it was.

HothHan said:
Kohl's. I would not have gotten them without some Kohl's cash that my wife had and a coupon. Fn $11.99 each lol
Click to expand...

Anyone that doesnt want the packin BAW parts, Ill take them PM me

ctonra said:
Anyone that doesnt want the packin BAW parts, Ill take them PM me
Click to expand...

I agree... I actually love the BAW parts... they are almost Droid like in a sense.

Why has no one posted a single image of these put together or on a figure?
I

EddieU said:
Not that there's isn't enough appealingly weird in that picture as is, but I wish this ridiculous dude had made it in:

I think it's unfair to call Warwick Davis 'ridiculous'

tauntaunweequay said:
Why has no one posted a single image of these put together or on a figure?
Click to expand...

I'll post some tonight on my Twitter feed @SWCHAMP. they are actually kinda cool. some are hit and miss but for the most part they kinda work as an "EU" inspired droid, or mini rig, or accessory
T

I love those pack in weapons .. so far I've only been able to complete the poe,resistance and tie pilot one. have the flame trooper one but need the others. if folks don't want them and don't mind posting them overseas( I'm in Ireland) I'll gladly take em. also loading a Youtube video review for them (hope it works been super slow to load stuff)

I have pics of all the completed BAW accessories on my Twitter feed @swchamp.

every time I try to upload photos on here it never works. I've even tried to upload using my phone.

tauntaunweequay said:
Why has no one posted a single image of these put together or on a figure?
Click to expand...

Are there new weapons with the wave 2 figures or are they the same ones with different figures? If there are more, it would be interesting to know how many Hasbro plan to make.

Thanks for trying, DA.


Trooper31 said:
I'd like to know this as well.

Are there new weapons with the wave 2 figures or are they the same ones with different figures? If there are more, it would be interesting to know how many Hasbro plan to make.
Click to expand...

They are all new. One is kinda cool, actually. It's snow themed and has some kind of skis on it, I think.

This is the only one that I have complete. It's kind of cool, but would be even better if the blaster cannon would turn on the turret. 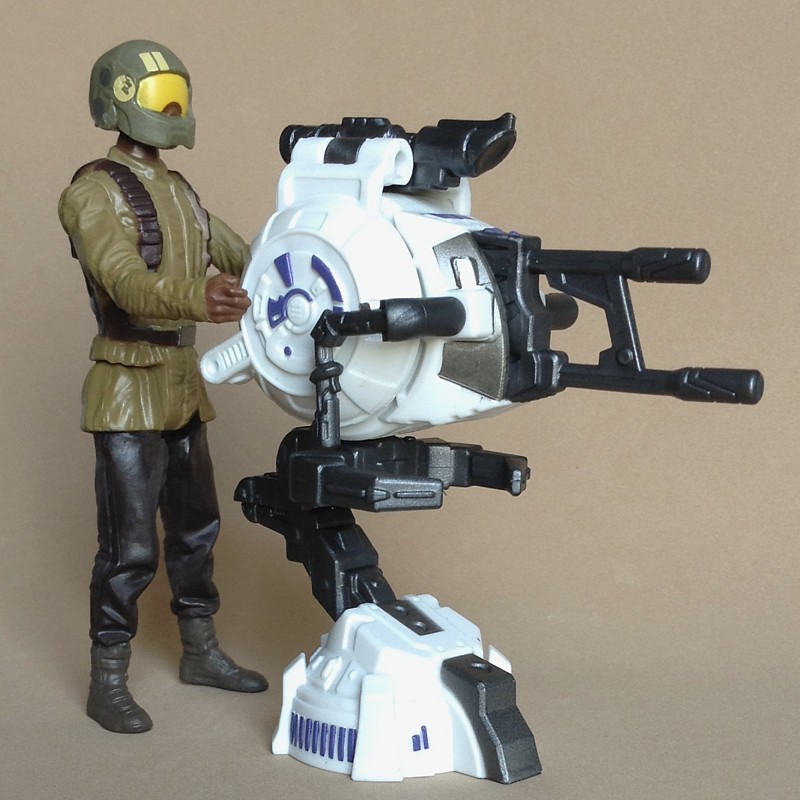 I don't want to be too cynical, but this really seemed like a sneaky way to get people to buy figures they didn't want for the sake of finishing an accessory they also might not want.

At least with build-a-droid, you could cobble together an asymmetrical kitbash and call it a new character.

So, yeah, I'd rather have just seen Hasbro skip the accessory and sell the figure for less. $8 is really steep for the quality.

Also, does anyone else think Hockey's space cannon looks like it should be able to transform into R2-D2?

Technically, you can also combine these into an asymmetrical kit bash. The peg sizes match.
P

my_kind_of_scum said:
Technically, you can also combine these into an asymmetrical kit bash. The peg sizes match.
Click to expand...

darthsatan said:
Money could have been spent on joints!
Click to expand...

Great idea! After a couple you wouldn't care that the figures were only 5POA. Oh wait, you meant articulation. Never mind.

my_kind_of_scum said:
Technically, you can also combine these into an asymmetrical kit bash. The peg sizes match.
Click to expand...

Pack-ins can be fun and although I haven't gotten any of These, it would be interesting to see what could be made with the various parts. If I was collecting These, I'd really have some Problems because figures like Darth Vader, I don't Need, so I'd really be stuck with single pieces.
S

I've found I dislike about half of these build-a-weapon contraptions, but I did put together the one for the second Wave Stromtrooper, Snowtrooper, and Asty, and it kinda makes a neat little droid. Its base parts are a jetpack, arm attaching blades, and a two-handed blaster cannon, but together, they actually look way more droid like than a weapon, and I kinda enjoy them, plus the three parts are actually somewhat useful separately.

Not that I have gone out and bought a ron of these 5 POA figures, but for the ones I have, the build a weapon part has been thrown into my misc. parts box. I've got no real use for them and have no plans on buying extra figures I do not want just to complete some silly hair brained pack in to justify a price hike.

I haven't opened any of my single-carded figures, but I definitely don't like the BAW pieces. They just look cheap to me.
They'd just end up in a drawer or a box if I did open them.

But I can see the appeal for some people. Especially children who don't care and just like the extra accessories.

I have mixed feelings about these - I would have preferred BAD or build a creature, instead of these Hasbro creations that likely don't appear in the movie. I ordered the Amazon exclusive troop set so I didn't pick up any single packed FO troops, so I likely cant build anything. The one that caught my eye was from Hux, Inquisitor, and the Guavian - unfortunately I have the Inquisitor already so I'll be missing that part. I really wish they would have given repacks BAW parts that weren't exclusive to their repacked release, as I have no desire to buy extra figures.

I feel the same about the Armor Up line - they're mostly useless (and too expensive) and likely not something from the movie. The only armor piece I like is from Chewie, but I have enough figures of him.

Yes, the repacks having a Piece that goes with 2 new figures seems like a bad idea. I understand that if there are 4 new figures and 2 repacks, it would be difficult to make that work, but they could have planned it a bit better with the 2 series of the 5 poa line, so the repacks could have fit together.

In the end, maybe this concept is better because I can only imagine People having to rebuy Rebels figures to get the final droid parts for a cool new TFA droid.
However, since None of These BAWs will end up in the film, it almost seems like a worthless gesture. I mean, if you could build an FO cannon or a Resistance Computer or some other nice set Piece, it would have been more interesting, but a space lawn mower seems like a waste of R&D, tooling Money, plastic, and time.
R

I find it irritating that general hux has a hole in his back for this nonsense.

It seems once These are built, many are stand alone pieces, but others seem to make some Kind of elaborate backpack/Gadget Thing. I don't have any of These, but are all of These make with some Kind of "peg" that allows the single Piece to be used as a backpack, then?

redwillow said:
I find it irritating that general hux has a hole in his back for this nonsense.
Click to expand...

This makes me madder than it should. I don't have plans to open them any time soon, so I'll probably not see his back for a long time.

But just the fact that they did it. Means they care more about BAW than we do. :weeabooface:
R

Please forgive me if this is bad form, but I see that many of you are not fans of the build-a-weapons.

My daughter really likes them, and I would be happy to pay shipping if anyone is interested in getting rid of extras.

Thanks all, and again sorry if this is something that is bad etiquette.

You could say that I'n rather jaded with them. When the Force Friday catalog leaked, I was ready to line up, money in fist, to buy every lightsaber I could get my hands on. I got into the store, and every lightsaber had holes in the pommels. Every. Single. One. There was not a single lightsaber in that store that was NOT part of the ridiculous Build-A-Saber line. Idunno is it was just me, but as a kid, I enjoyed the realism in the lightsaber toys. How they were "just like the ones in the movie!" (as I remember them being advertised). Now they all have holes. WTF! Lightsabers don't have holes in them. I'm just so done with Hasbro, and I don't care if I bought another item from them again.

It's just added play value for the kids, it's a very smart idea actually. Obviously they aren't for you, maybe try the Hasbro fx line instead?
You must log in or register to reply here.
Share:
Facebook Twitter Pinterest Email Link
Top