New pictures have surfaced of a Movie heroes Boba Fett with firing backpack, thoughts on this figure?
Last edited: Jul 12, 2012

I guess they could have saved tooling costs by simply using POTJ 200th Figure Boba Fett's / SAGA Kamino Escape Jango Fett's missile firing jetpack instead and perhaps included the exhaust flame base from the SAGA Pit of Carkoon Boba.
They could have also exchanged the arms with the Legacy TESB sculpt and repainted this VOTC sculpt accordingly to that movie's outfit color scheme, thus giving us the first non-removable helmet SA TESB Boba ever.

Honestly as much as I like the character, I'm simply done buying figures of him.
The latest version is just fine with me.

Yep, that is Bob. Boba doesn't use a big ole chunky backpack.

It looks like the same figure with a new grappling hook backpack accessory - kind of like the MH snowspeeder Luke.

I'd buy it for my kids. Except I don't have any. So no Fett purchase here.

Masterfett said:
Honestly as much as I like the character, I'm simply done buying figures of him.
The latest version is just fine with me.
Click to expand...

I don't need any either at this point. If they added bj hips or Jeremy Bulloch's head, then I'd be all over one. However, it's nice to see Boba instead of another character that we really don't need.

I was using my iPhone, the autocorrect changed it. It has been fixed back to what it once was.
D

(With a side order of pointless)

GNT said:
I was using my iPhone, the autocorrect changed it. It has been fixed back to what it once was.
Click to expand...

You should tell Mac that Boba Fett should be highest in priority in auto correct. Even though I have relatives named Bob it would be worth it to us, as well as countless others, to see Boba Fett's name every time we try to type Bob. And for those who neglect to check their auto correct, there will be countless Bobs in the world who think it is awesome to be unintentionally called Boba Fett.
Last edited: Jul 12, 2012

I know that we seem to be constantly slating the Movie Heroes line lately, even if it is for kids.

But I would much, much, much rather see a slightly retooled Boba Fett, even if it has less articulation, than just a straight up Saga Legend repack. I know MH has its fair share of repacks too, but at least there is some SLIGHTLY new stuff on offer, too.
D

they could always repack the 300th Fett if they need a firing fett.

They have a ton of Fetts they could use and if MH continues for a few years, we might see a number of versions of him.
K

Ive over 2000 boba fett items and its my focus... so put me down for one of each EU card Canadian US and any others that appear..

Couple of questions on this one...

Where the heck is his range finder?

Why is his cape on the wrong side???

If those two issues are fixed on the production figure, I may pick one up. The idea of the grappling hook rocket is cool, kind of a throw back to the Vintage 12" figure / some of the concept art. 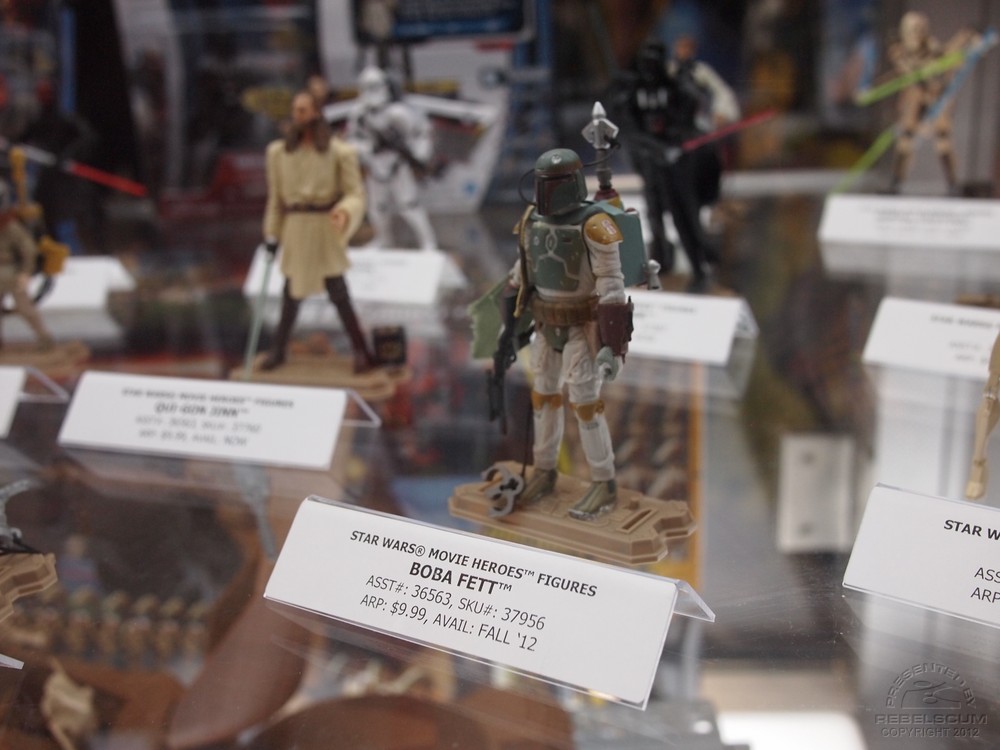 In one image somewhere I saw the range finder. The cape is on the right side but got pushed over in that shot.

Cool, thanks for clearing that up.
S

The figure is acceptable. I'll pick one up to keep on the card and one for my son to open.

Yay! Another complete waste of peg space at retail.

Keep it up, Hasbro. You're killing the Star Wars market just a little bit more every year.
W

I don't know whether I'm in the minority here or not, but I actually like this figure, seeing that it appears to be decently articulated; unlike some of the previous MH stuff we've seen so far with the likes of the non light-up Vader, the Wave 1 Maul and the ancient Grievous & Yoda. Also since there is some customizing potential for this figure.
J

I'm in the minority with you! We'll call ourselves "Team Minority"!! I agree it's like a throw-back to the 12" Kenner Boba Fett. Hoping that the backpack fits just like the VOTC backpack did.

Since it doesn't appear to have a removable helmet, maybe I'll pick up one or two to customize some Mandalorians.
J

Revanfan1 said:
Since it doesn't appear to have a removable helmet, maybe I'll pick up one or two to customize some Mandalorians.
Click to expand...

Keep it up, Hasbro. You're killing the Star Wars market just a little bit more every year.
Click to expand...

Well, ok you're right, but it's better than another Battle Droid, right?

Anyone found this in US?
S

These are only available overseas. I'm not paying $80 for a repack with "new features". With the newly announced Wave 1 2013 Assortment they added the Sandtrooper, Anakin Light up and Battle Droid (this time in maroon) but not Boba. UGH. Does anyone know if this will be added in later 2013 waves?

He is so rare and hard to find here in Hong Kong!!!

I'm surprised its being sold on the blue card still, dispite all the others being in the 2013 Green yoda wave.

I did find the 'Wave 3' Hasbro were talking about at toyfair, with Light up Vader and Harpoon Luke. This was in Bristol UK last month.

Saw one sold for over US$100 just a few days ago on evilbay:wtf:

^ Hmmm... I guess I *should* buy some of the ones available over here as future investments then. :hmm:

Picked one up for a Scummer last week and even though I already have an extra 2004 vintage ROTJ Boba Fett still sealed on card, I was tempted to buy him just for the neat-looking action feature.
Last edited: Mar 24, 2013

The one movie heroes figure that's not rotting the toy aisle and I wish it was.

Tyranusspotting said:
^ Hmmm... I guess I *should* buy some of the ones available over here as future investments then. :hmm:

Picked one up for a Scummer last week and even though I already have an extra 2004 vintage ROTJ Boba Fett still sealed on card, I was tempted to buy him just for the neat-looking action feature.
Click to expand...

With TOY PALACE cancelling the pre-orders on the case containing the last 4 movie heroes on the Maul cardback,you can see the scramble and subsequent bloodbath on Ebay...

way to go again,Hasbro.....screw the loyal fan base that actually DID buy the other 19 movie heroes(including the LAME repacks)and then make the last 4(that were new!!)impossible to get!!

Glad to hear you got it. Did you want it for the packaging or to open? If to open, what's different besides the backpack?

Yeah Matthias hooked me up....I'm absolutely delighted that my fellow Scummers are so considerate and understanding of this sickness of completism......

i have no idea how different Boba backpack is....but when Toy Palace pulled the plug on pre-orders I had a premonition that the ensuing ebay BLOODBATH would be nasty....

With many hitting the $100 dollar/€60 Euro mark it would appear the seemingly small quantities of these has galvanised the completists into shock and awe!!!(kill or be killed!!!)

With nothing actually being super rare nowadays it may be more appear at clearance outlets down the line. However these could turn out to be highly desirable(unlike wave one)and are yet another example of a Hasbro WTF? moment....
Hasbro team member"you know those Movie Hero repacks that are clogging shelves worldwide??"
DDP"Yeah??"
Hasbro team member"well....lets limit the new sculpts that the collectors actually want to insanely small numbers and send them to Germany,Austria and the Czech Republic"
DDP"that will teach them for not buying the MTT!!"
Hasbro team member".....I love you,Mr Depriest!!!"
DDP"please call me Derryl!!!".....

Hello, i am Gabor, a new member in the forum, but i always check what was in here. I'm collecting vintage bootlegs and vintage Boba Fett figures.
So i wrote here for one reason, i have a movie heroes mh24 Boba Fett figure, but i'm not collecting modern figures (only one i have, a Yarna Dal Gargan).
The figure is in excellent shape c-9, misb. If anyone need this e-mail me: sw.gabor(at)gmail(dot)com
Here's a photo from the figure: ImageShack® - Online Photo and Video Hosting
G

Hello Everybody!
The XMAS here or the Easter bunny?
So today call a friend of my (he work a little toy shop), his know i'm a star wars fan and collector and i visited him. What was i saw? 9 pieces MH24 Boba Fett.
So collectors i have 9 pieces Movie heroes Boba Fett.

It's absolutely unaceptable that Hasbro has not made this cool Boba Fett version available here in the New World!!!
I can understand the completists upset and this is nothing short of an outrage.

RADAR4 said:
It's absolutely unaceptable that Hasbro has not made this cool Boba Fett version available here in the New World!!!
I can understand the completists upset and this is nothing short of an outrage.
Click to expand...