The Wal-Mart Comic Packs have hit! I Found 3 Cases at Wal-Mart in Trussville Saturday Night.
D

I found two cases of the new Evolutions. I got both cases. Found one at Roebuck Wal-Mart, and the other one at Lakeshore/Homewood Wal-Mart.
C

You bought all from both cases? And didn't leave any packs for other Scummers?

Yea, One set to keep sealed, and one set to open for my loose collection.
B

Ah, thanks for the heads-up. I saw where they'd hit on the west coast, but didn't realize they were out around here. This is going to be a bit pricey. I'm really liking all of the Evolutions sets in this wave.
J

Here's stuff I have for Trade/Sell
TRADE/SELL
C

Collectorplay, if Jason doesn't need both Revan's and the second one is available, I'd be very interested in purchasing it. If so, just shoot me a pm and let me know what you'd want for it. I never once saw one at retail. Thanks!

Found the Aalya Starfighter and The Force Unleashed Battle Pack at Trussville Target. Waiting for those Order 66 Packs.
B

Anyone into Star Wars Transformers??!?!

Thinking about thinning out my line of these.

All the Targets in my area have them in the backroom. They won't be put out for a little while longer (i believe) so...

if you want them now, it's gotta be backroom style


i'm passing on them
D

Anyone found the new Legands Wave yet? It should be hitting Wal-Marts soon.
J

Thanks Maximus!
Got the Order 66's at Alabaster Target Last night!
B

I know there's a Buy/Sell/Trade section of the forums, but this is a rather large item with no realistic way to ship it. So I'm hoping a local collector will be interested. I have a store promotional book display from the Shadows of the Empire novel. It will hold around 20 or so hardback novels, or many more paperback books. I've used it to display both on multiple occasions. Unfortunately, due to space concerns, I have to let it go. Asking $25, but open to offers. Thanks!

Anyone come on these boards anymore? Anyone find Force Unleashed Battle Rancor yet?!?!
D

I haven't seen it yet Jango. When I find it, I will let you know.
B

I still haven't seen it either.

And yeah, it's kinda sad watching the tumbleweeds roll through here now.
T

Wait..what am I doing here?
B

Yea, Crayfish, What are you doing here?... Ha Ha! Welcome Back!
D

Battle Rancor was found in New York. Be on the lookout! It should hit soon.
D

Finally, Sideshow will be doing a 12" Darth Vader figure in armor! I will be adding this one to my Sideshow Collection. I just hope they don't charge an arm and a leg for it.
B

Well, I had an interesting find at TRU yesterday. I actually managed to snag the Crimson Empire Kir Kanos / Carnor Jax 2-pack. I know they were originally an EE exclusive, and I also knew that they eventually released them at retail. But I thought that was MONTHS ago and I'd simply missed the boat. So it was a pretty nice surprise to see it on the pegs yesterday.

***EDIT - Well, apparently this isn't really as impressive as I first thought, as I saw another one at the Leeds Wal-Mart this evening. Ah well, perhaps there's someone out there like me who was still wanting one after all this time...
D

Dang,..I need to get up there to Trussville. Over memorial day I stopped at at least 5 Targets in Georgia and disn't see a dang Rancor. They been spotted in Alabaster or 280 yet (those stores are closer to me)? Any left in Trussville?
B

Jason, I saw 2 on the shelf at the Alabaster Target this past Thursday night. Left them both.

I haven't seen much of anything on 280 in quite some time.
J

Thanks guys! I picked up the last one in Alabaster at 7:30 last night. I was able to use a $5 off a $25 toy purchase coupon I got from www.swactionnews.com.
Guess most of us Hasbro collectors can rest easy til the middle/end of Summer.
J

Anyone found any Indiana Jones and the Last Crusade figures yet?
D

I have not found them yet Jason, but I know they are hitting Wal-Marts. Should be any day now.
B

Found the new comic 2-packs at Wal-Mart in Trussville. They were extremely beat down, though. Hope other stores fare better.

Heads up......I was at the Pelham Wal-Mart yesterday and found The Legacy Collection-Evolutions The Fett Legacy boxed figure set; it was in an odd spot with some other toys, not in the Star Wars section. I went and scanned it and it read "See Associate". I figured based on other posts I've read, someone put it out too early. I put it back with the Hot Wheels stuff where I found it.....
D

Hey long time no post, but if anyone needs a Rancor Ive seen several in Destin Florida....all on clearance. The Air Force sent me down for a good while and I wouldnt mind picking one up and bringing it back. BTW if any of you guys ever make it to Florida and need a place to crash Ive got a beach condo with a few extra beds. Whats everyone doing for Clone Wars Friday/Saturday?
D

That's cool man! My brother is stationed at Eglin AFB. He has been in the Air Force 20 years now. Looks like I will be doing the Toys R Us Midnight thing and Wal-Mart's after that.
D

I'm not sure if anyone here is a Transformers fan, but has anyone seen any of the new Transformers Animated figures? I could really go for a Soundwave.
J

I heard TRU in Hoover onlyhas 1 case of Holo figs,..Hopefully TRu will get more than just 1 case of Holo Grevious's. I also heard you can buy Grevious outright for like $10. Is this true???
Seeing as it was easyto get other holo figs at TRu I'mnot too worried.
Does anyone know TRU's price point for basic figs at TRU? I think Target's is up to $7.99, but Walmart is still 6.97. I might just pick up Grevious for $10 then go to Walmart and pick up the rest at the $6.97 price point.
TRU will also be offering the Holo Grevious via their online store so if hoover runs out I'll try to get it there!

When's everyone getting in line?
J 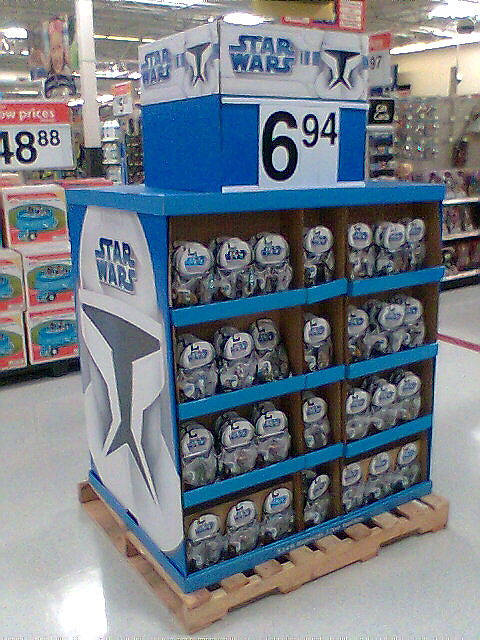