Hi Jeff. Below are theanswers to your questions about The Big Bang Theory 3 3/4-inch figures.
1.) Areall the figures going to be released as a set or are they going to be releasedseparately?
They are released as a caseassortment for wholesale and will sell individually on retail.
2.) Howare the shirt variations for the Sheldon figure going to be handled? Is itgoing to be a blind bag type of promotion or will we be able to order the oneswe want directly from Entertainment Earth
There are 4 shirtvariations and they will be limited and numbered. Each style will bedifferent in the edition size. We will post this on the site on Tuesday2/3.
3.) Depending on the successof the first series / wave of figures are there plans to make more charactersfrom the show or have more convention exclusives like the SDCC Sheldon?
We are working on a Series 2set to be announced later.
Fans are looking atpossibly getting a set of the main cast in their Superhero costumes: Sheldon asthe Flash, Leonard as Green Lantern, Raj as Aquaman, Howard as Batman, Zak asSuperman and Penny as Wonderwoman.
We would love todo these but I cannot comment on whether they are in the works or not.

here's hoping that these start showing up soon.

DarkArtist said:
I guess I'm on the other side of the fence as I love the look of the SDCC Sheldon figure. I'm eagerly awaiting this line.
Click to expand... 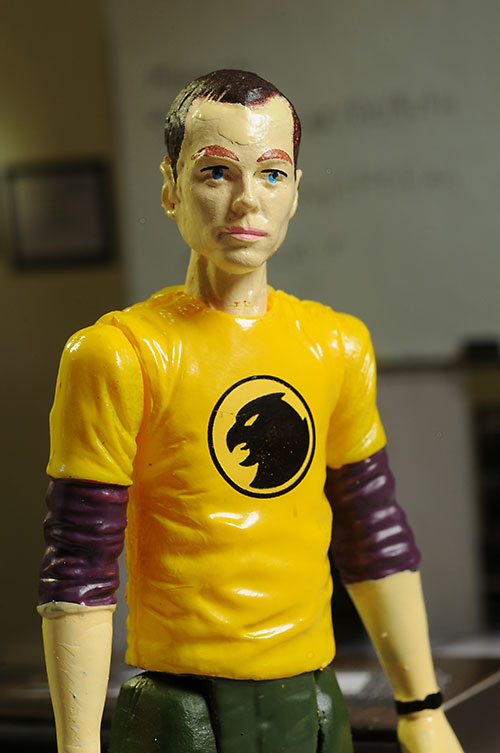 Good god, are we talking about the same figure? Do you work for biff bang pow by any chance?

Good god, are we talking about the same figure? Do you work for biff bang pow by any chance?
Click to expand...

no I don't work for Bif Bang Pow. I'm sorry your figure had bad paint apps. Mine looks a lot better then this figure.

Either way way everyone is entitled to their opinion. You seem to dislike yours while I love mine

Boy that looks bad, maybe they got it mixed up with drag-queen Sheldon?

I sure hope they turn out better than that, or it will be a very short run.

DarkArtist would you mind posting a photo of yours?

Doesn't look like he got dropped in a blender.

I have tons of pics of Sheldon on my Twitter feed @swchamp.

Nothing that's gonna win any awards is it? The face isn't too clear from the twitter feed or the above picture, but it's clear that your sheldon has yellow bleeding on his arm. I think Ill stick with the soon to be released Lego Ideas set

In any case... I happen to be a big fan of the figure and I'm looking forward to getting the rest of Wave 1 as well as the shirt variations of Sheldon and I eagerly await seeing what's in store for series 2.

all the figures are currently up for pre-order on EE now. all of the Sheldon's are listed individually as well so you can pick and choose which T-Shirt version you would like. sadly they are not coming out till May though

just got the confirmation from Bif Bang Pow through my Twitter feed.

already ordered myself a complete set of all the figures including extra's of Penny and Bernadette for custom work.

picked up a set of the EE Exclusive Big Bang Theory Minimates sets. these are super cool and cute at the same time. each set comes with 4 figures (2 different versions of Sheldon) a couch and interchangeable accessories.

And it appears that wave 2 is losing some articulation, compared to wave 1. Which is sad, think of the Customs we could have had!

did wave one have more articulation? I haven't seen them yet in person. with the amount of reaction fans I see complaining about too much articulation on the other retro lines I guess it wouldn't surprise me.

Wave one was only 5POA...didn't notice that before.

Sure? The pics I remember looking at had elbow joints.

Masterfett said:
Sure? The pics I remember looking at had elbow joints.
Click to expand...

I think the prototypes were going to have elbow joints but they took those out. the SDCC Sheldon doesn't have elbow articulation. still the Wave 2 Star Trek line looks good.

They did away with the elbow articulation? Ugh. I may have to cancel my preorders. So tired of the retro style... (I know, I know.)

well the line got pushed back to June release now. hopefully they will be here soon. I'm really looking forward to these figures.

I also order a couple of the SDCC SNL figures from EE. perhaps the head sculpts will make for some good custom fodder. the Tina fey figure could be as can Amy Poehler's. not sure what I'll do with the bodies of the figures yet

Not sure I'll commit to them now. At first yeah, but the limited articulation than what was previously shown. And the delay doesn't help. I really only wanted them for fodder anyways, but now I feel less like doing the project I once considered.
These delays really hurt IMO.

Masterfett said:
Not sure I'll commit to them now. At first yeah, but the limited articulation than what was previously shown. And the delay doesn't help. I really only wanted them for fodder anyways, but now I feel less like doing the project I once considered.
These delays really hurt IMO.
Click to expand...

I still want them but I agree with the delays. I hate when product is constantly pushed back as it affects sales in the long run. now I fear for the wave 2 Star Trek versions that they showed.

got an email from EE and Bif Bang Pow that they will have an SDCC exclusive Sheldon and Stewart 2 pack for sale and the diorama will be Stewart's Comic Book store. already placed my order for this set at EE.

I went ahead and ordered the exclusive set, but am disappointed that Bif Bang is scaling everything back to 5POA. Elbows really help make more interesting poses.

personally I wish Bif Bang Pow would go full articulation similar to Hasbro's SW line. this way the articulation adds more play factor to the figures. either way I'm beyond stoked to be getting a TBBT figure line.

I just wish they would start shipping them already.

looks like these got pushed back to August now I hate the delays in these figures....

Well, more than likely I pass on them now. After the wait I may not find i really nee them as much as I thought. I'm already on the fence right now. But if they were available right now, it's more incentive to buy now. Waiting just puts me that much further from buying.

I still want these regardless. I waited a long time for the SDCC version of Sheldon to surface. I think I finally had him in hand late August/September. I just wish that things didn't keep getting pushed back and back. I already have the complete wave on order as well as the SDCC exclusive Sheldon and Stewart 2 pack, and I'm really hoping that pre-orders will start up soon for TBBT Star Trek wave.

Let's hope that the figures show up before the new season turns us off.
(Didn't really enjoy last season as you may have guessed.)

VideoViper said:
Let's hope that the figures show up before the new season turns us off.
(Didn't really enjoy last season as you may have guessed.)
Click to expand...

what was wrong with last season that you didn't enjoy? the only problem I had with it was Penny's new hairstyle. I'm eager to see what happens with Sheldon and Amy

Penny's new hairstyle is the least of the show's problems.

DarkArtist said:
what was wrong with last season that you didn't enjoy? the only problem I had with it was Penny's new hairstyle. I'm eager to see what happens with Sheldon and Amy
Click to expand...

Just wasn't as funny, wife wasn't watching it at all (She started me on the show as a passive way to make fun of me ) I like that some of the characters are moving on in their lives, (Looking at you Friends, by the end we hated you!) But there were a few why am I watching this moments.

With a young kid at home I do need to go out of my way to keep up with a show.
D

DarkArtist said:
what was wrong with last season that you didn't enjoy? the only problem I had with it was Penny's new hairstyle. I'm eager to see what happens with Sheldon and Amy
Click to expand...

Umm, thats Shamy to you sir...

should have the SDCC Stewart and Sheldon set hopefully by tomorrow. now here's hoping that the rest of TBBT figures start to ship soon. I'm bummed that they were pushed back till August.

I finally got the SDCC Sheldon and Stewart set today. the set is cool, Stewart is a little funky and seems very short for an action figure. I haven't put together the pop up comic book store diorama yet but it looks neat.

the box for the set reveals an upcoming ST:TNG away party set featuring Sheldon as Data, Leonard as Picard, Raj as Worf and Howard as the Borg. looks pretty neat so far.

can't wait for the rest of Wave 1 to finally ship. I'm really looking forward to getting them. I know at TF they showed a series 2 with the cast in classic Star Trek TV series uniforms so here's hoping that they get made.

I love the show, but last season wasn't as hilarious as previous seasons. IMHO, It was funny, but more chuckles and less guffaws.
I love the ST versions. They would fin in ST or SW dioramas seamlessly.
I'd also consider getting them as Justice League characters it that ever happens.

Utinniii said:
I love the show, but last season wasn't as hilarious as previous seasons. IMHO, It was funny, but more chuckles and less guffaws.
I love the ST versions. They would fin in ST or SW dioramas seamlessly.
I'd also consider getting them as Justice League characters it that ever happens.
Click to expand...

I contacted bifbangpow on the concept of the group as the Justice League and they said it's a set they really want to do and they are working on it but it might not happen due to copyrights from the WB.

I'd be all for a convention exclusive of Bob Newhart as Sheldon's Spirit Jedi. they could even make an exclusive SW set that has a James Earl Jones figure as well as Carrie Fisher.
D

JEJ and CF
That would be awesome!!!!

looks like the figures were pushed back till September now. I'm really getting annoyed at the delays in these figures. I don't understand how you can show prototypes for these figures back in February as well as a second series of figures, so now exclusive set for SDCC and then 1 month before SDCC reveal and exclusive 2 pack and those figures are produced before the rest of the original first wave.

if these figures keep getting pushed back further and further I fear for the future of these action figures...makes me wonder if we will ever see the series 2 Star Trek versions or the exclusive 4 Back STTNG landing party set