A buddy of mine saw this on FB- found at WDW

Like I said in the other topic, I was hoping for a Christmas present GNK droid this year. But this is cool. I just hope they don't keep releasing BBs in different colors successively as holiday droids in the years to come. They would make for nice Christmas tree decor though :hmm:
D

How disappointing!
I was hoping for an R5 like the Halloween droid, being as they have seemingly been counting up model numbers over the years.
It's not even an appealing colour scheme.
Solid PASS.

^ I've noticed that pattern as well and was rather looking forward to an r6 and eventual r7 model. Given bb's are smaller and some R#'s have been given extra minor accessories, adding the gonk model as an accessory, would've topped this offering and made it more $$-worthy and still keep the Christmas tree motiff- a bulb ornament and present. As PC as Disney wants to appear, I'm surprised so for there has not been a Hanakha themed holiday droid after all they are calling it "holiday" to avoid the word "Christmas" but other than last year's New Year's themed droid, all been Christmas themed. And I didn't mean to leave out Kwanza (sp?) motiff, they couldve done one of these as well. Still, I'll have to get this little booger.

I like it, but I'm partial to R-Series droids. At any rate, hoping I can find this in two weeks when I head to WDW.

Said it elsewhere already, but I'm gonna pass on this one. Much like the candy corn droid, I'm just not feeling this concept and color combo. The translucent orange/red body is an odd choice, especially when paired with an all silver head. I assume it's supposed to look like a standard, old school Christmas ornament, but it's just not working for me. They really need to go back to just doing red/green/white/gold/silver variations of the classic astromechs. Something like this: 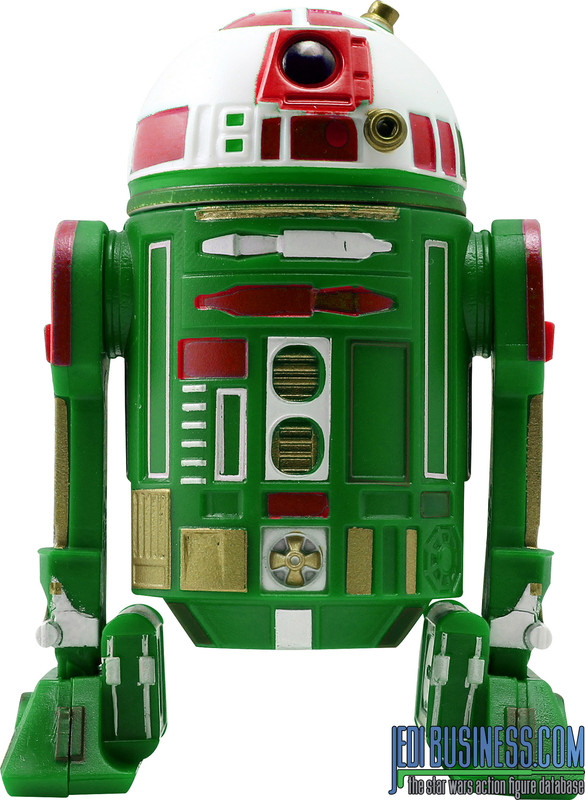 After months of waiting this was a ... letdown. I kinda of see it as a holiday ornament but its just not really there, very much like last year's. I am disappointed it is not an R5 to stick with the trend. I would also like to say I enjoyed the extras in years past (candy corn and arm, mistletoe and arm, drink tray). This seems small and lacking for what will be the same price. Would have been nice to get some add on to stand for an ornament hook somehow. Pairing this with a gonk as a gift would have been superb.

I am complaining yet I still plan to get it. I like the droid factory BB units.

R1G4R3PO said:
^ is that a custom, Photoshop? I don't recall it nor see it on jedibusiness site
Click to expand...

Yeah, just a quick photo-manip I did to demonstrate what I want the holiday droids to be. I guess some might find it boring to just get color variations of past figures, but I would prefer that over these, uh, "interpretative" droids they've been doing lately. They're really hit or miss. The recent BOO droid, for example, was a hit in my book, but the candy corn droid was definitely a miss. This BB unit is a BIG miss to me. Glad some will like it, but now I'm back to waiting another whole year for something I hopefully want to buy.

I do see where they were going with this, "tree ornament"? Not a bad looking deco, but not really into the BB series. So saved some cash and aggravation trying to track one down. lol

Figured they would eventually switch it up for one "their" Droids one day, but it's a bummer not getting a classic R series.

Given Disney’s track record, this is the year to do it, since IF the ST fails it won’t be that feasible to make this in the future.

These holiday droids have sort of become a tradition for me to buy each year, I hope they keep them around for a while. Not too crazy about this one but couldn't skip it.

Free shipping on their website today with code FREESHIP. Also, if you have a Disney Chase Visa card, get an additional 10% off with code DRVCMEMBER.

beagan said:
Free shipping on their website today with code FREESHIP. Also, if you have a Disney Chase Visa card, get an additional 10% off with code DRVCMEMBER.
Click to expand...

Thanks for the heads up on the discount codes! I just ordered mine at 10% off with free shipping!

My BB arrived today from ShopDisney.

Picked this orange ball up tonight at Disney Springs.

picked this guy up on Sunday at Hollywood Studios.

Received my two from Disneystore.com...was reading the card back, and it says it is seen roaming around Maz Kanata's castle. Still kinda feels like an odd choice for a holiday droid lol. Gonna pop one open.